woke up ard 8+ this morning.. went to the hougang market with my mum to buy the vegetarian kuey tiao soup for my ah ma.. then we proceed to bishan to meet my aunt and we headed to guan ming shan to bai my ah ma.. after tat, we went suntec to buy some stuff.

its been sometime since i last went to town.. looks like i’ve not been seeing my frenz for quite some time.. as usual, its really crowded.. walked over to carefour and we spent a total of $131 with those stuff we bought, but most of them are my aunt’s stuffs. took a cab back to amk and had dinner at my ah ma house.. after dinner, i went to topstep salon at amk central to cut my hair.. now i’m officially Mr BOTAK.. haiz.. rather sad to say goodbye to my precious hair.. after cutting my hair, took a cab back home..

here’s the last pic where i’m still having my hair and the 1st pic of my botak head.. comparison of the two haha.. 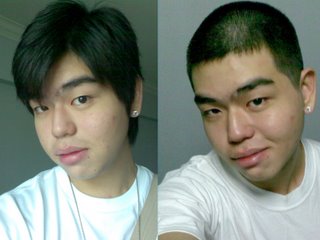 a few more days left… there’s so much i wanna do.. i wanna go k box and sing like no tomorrow and go shoppin haha.. and there’s so many stuff that i wanna eat.. KFC, CarlsJunior, Steamboat, Buffet, and many many more..~~!!!!

there goes another day~

there goes another day~