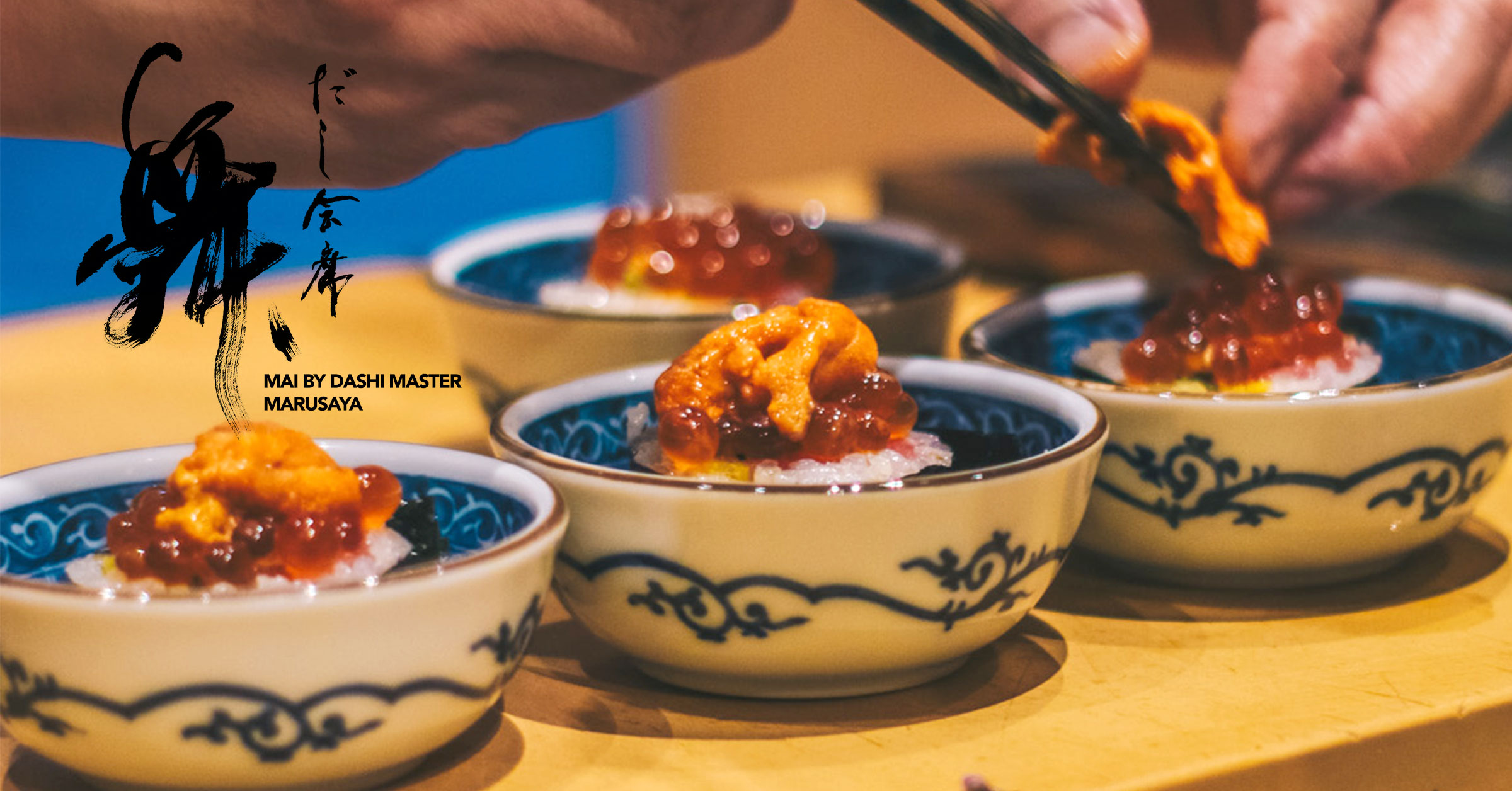 Located just a short walk from Outram Park MRT is MAI by Dashi Master Marusaya a traditional Japanese dining location Launched in 2019, MAI is one of the best new places to look out for Omakase and Sushi. MAI’s unique focus is on Dashi which is the quintessential foundation of Japanese cuisine and is prepared from kombu and dried bonito flakes. In addition to MAI, the group also owns flagship restaurant, Dashi Master Marusaya at Robertson Quay, TEN Sushi at Robertson Quay and Monte Risaia at Duxton. 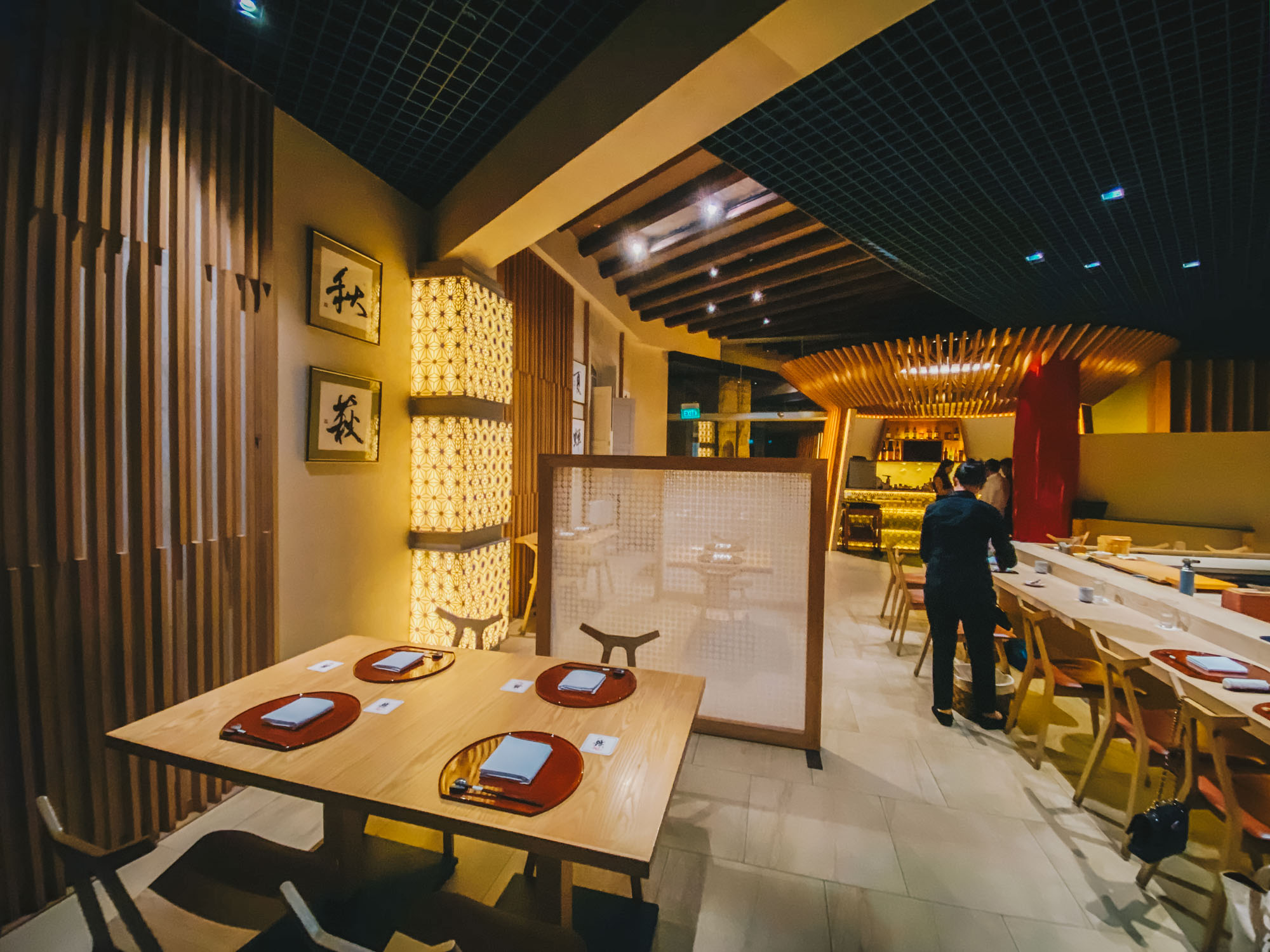 We started the Omakase(have it your way) meal with the Hotaru Ika (Firefly Squid) with Japanese Kai Lan and Katsuobushi (Skipjack Tuna bonito flakes).This was the first time we were having Japanese Kai Lan and it was light and crunchy without the bitter taste. The cold Kai Lan soaked in a sourish Dashi that was refreshing. This played well with the tender Squid and the deep umami flavour from the bonito flakes grated right before our eyes!

We found the Black Sesame Tofu with Ikura (Salmon Roe) in Dashi Stock particularly interesting with the slightly bitter flavour of the sesame. The Soya Sauce, Mirin, and Dashi brought the saltness and the Salmon Roe provided another layer of salty goodness to the dish. 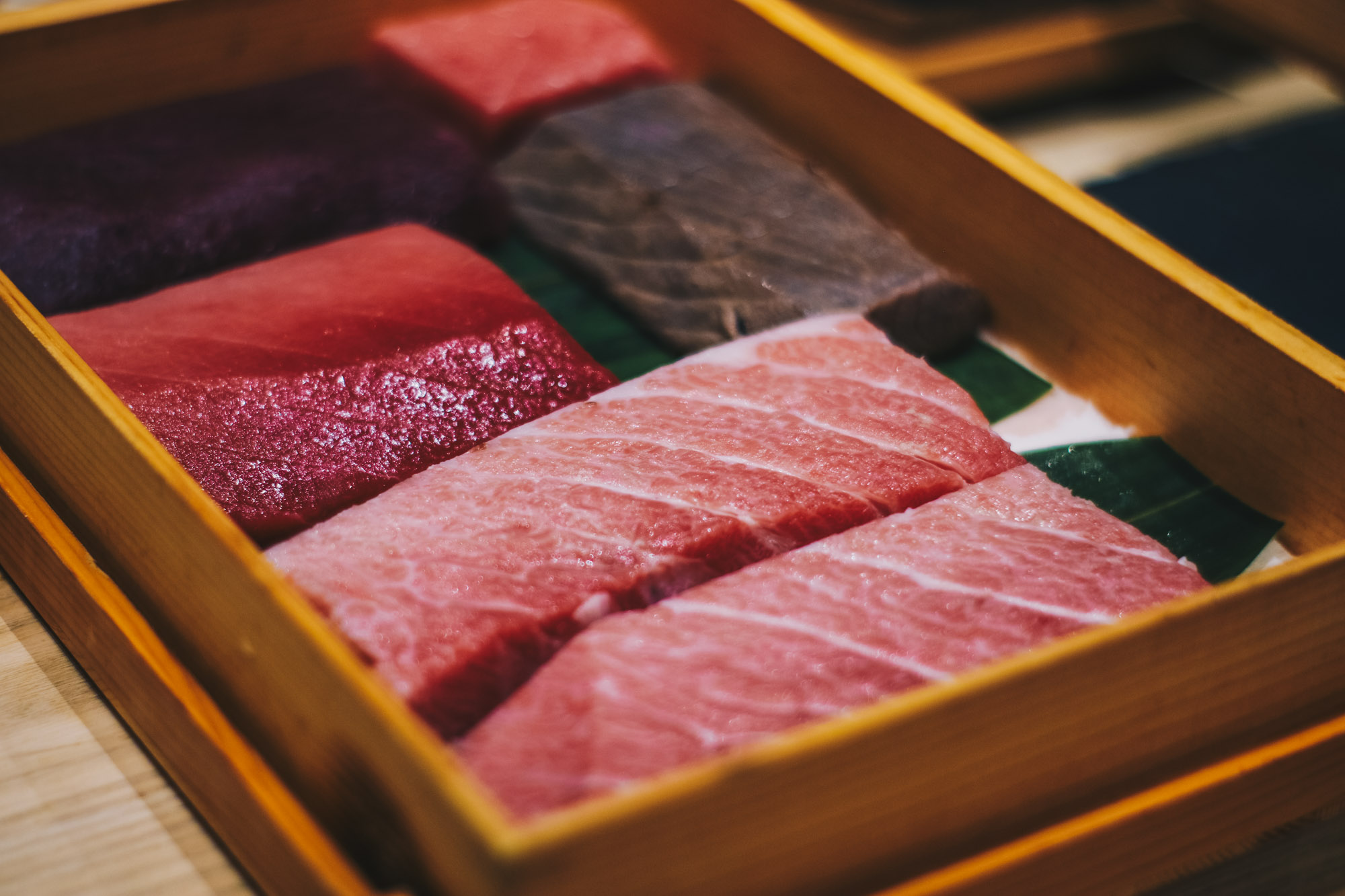 We got to experience the laser precision of Chef Hiroyuki Ono’s knife skills as he slices up our Sashimi:

Spanish Mackerel, Chutoro, Kinmedai (Splendid Alfonsino). The skin of the Spanish Mackerel was flamed kissed in front of the guest to bring a light charred to the skin and finally garnished with Wasabi flower. Each piece of fish was light and brought a very clean and pleasing flavour. The Chutoro was extremely tender and melted in our mouths.

The Hokkaido Kegani (Horsehair Crab) was another one of our favourites with Sweet Vinegar Sauce. The sweetness of the crab paired well with the vinegar sauce and the seaweed complement with the chewy texture.

The Sakura Ebi with Ashitaba (Angelia Keiskei, also known as Tomorrow’s Leaf) with Matcha Salt and Japanese Lime was another unique dish. The sweet sakura is harvested at the Suruga Bay of the Shizuoka Prefecture of Japan are perfect little pops of umami. The Saltness and Japanese lime lifted the tempura dish. 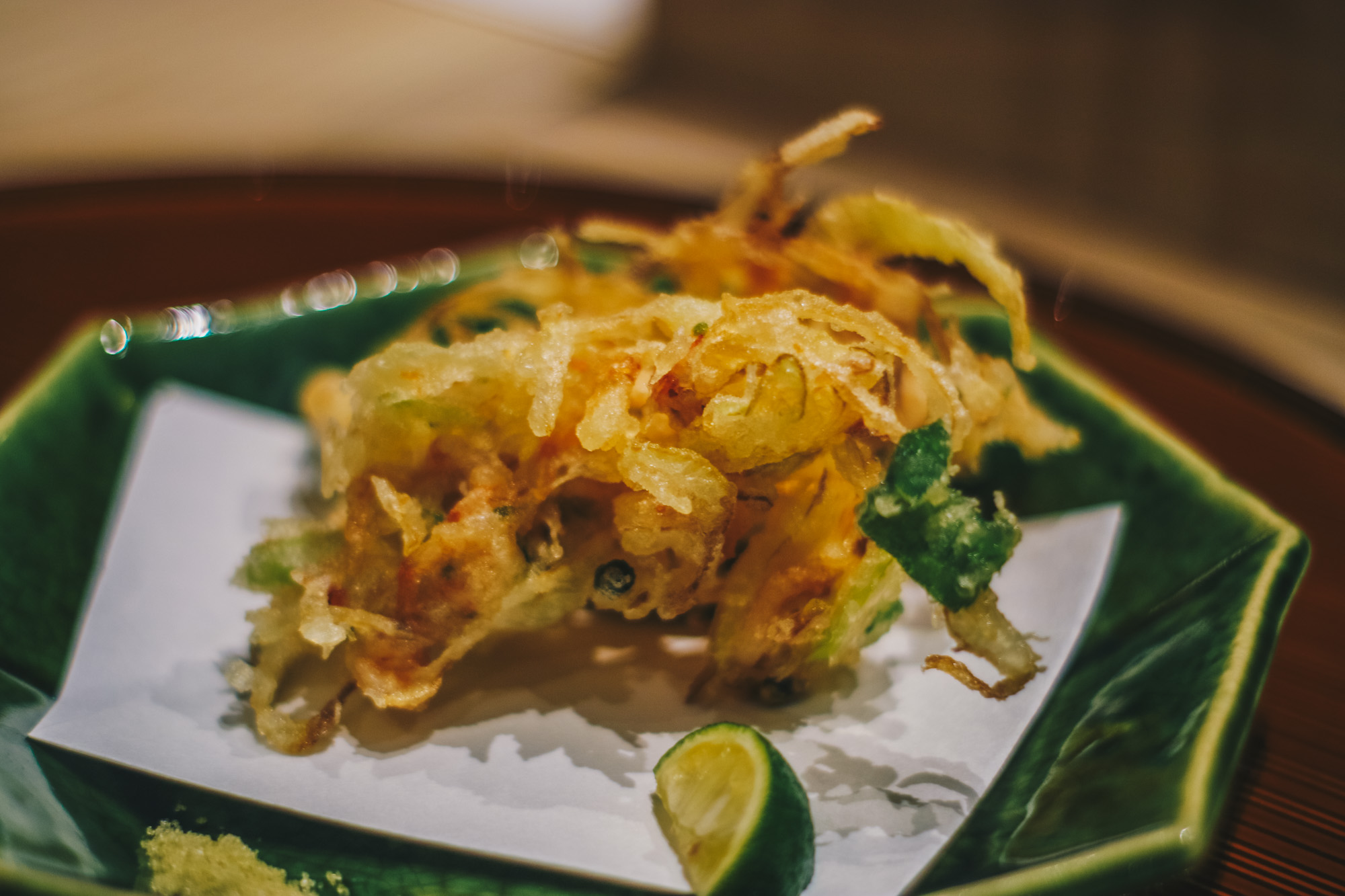 The Wagyu with Bamboo Shoot and Bell Pepper in Sukiyaki Sauce is a spring dish that I loved. The tender wagyu had a very deep soy sauce flavour without being over salty. The Bamboo shoot and bell pepper were crunchy and well-executed.

The Otoro (Tuna Belly) Temaki (Handroll)was like a “Japanese Taco” the marinated tuna belly was flame-kissed before it was served with the red vinegar sushi rice and seaweed. 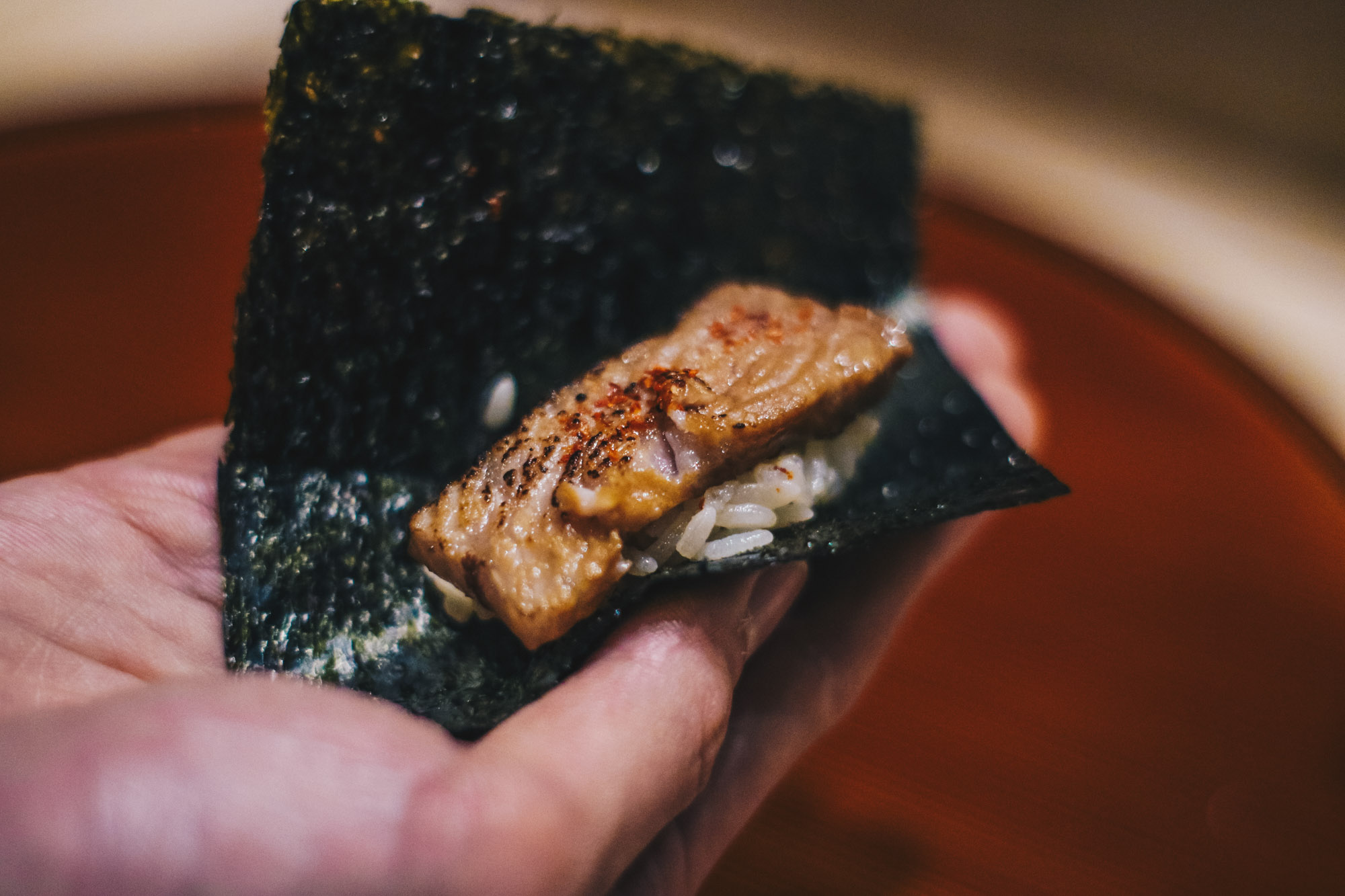 The Wild Fresh Tai (Red Snapper) with Tai Liver,Aburi Otoro (Tuna Belly) and Marinated Maguro (Tuna)was a texture play in the mouth. An innovation in Sushi with a marinated and raw pairing. The fish was tender and melted away in our mouth after a few bites.

Hokkaido Hotate (Scallop) and Hokkaido Uni (Sea Urchin)was a highlight for the night, the generous portion of sea urchin had the taste of the ocean and it paired well with the fresh scallop. 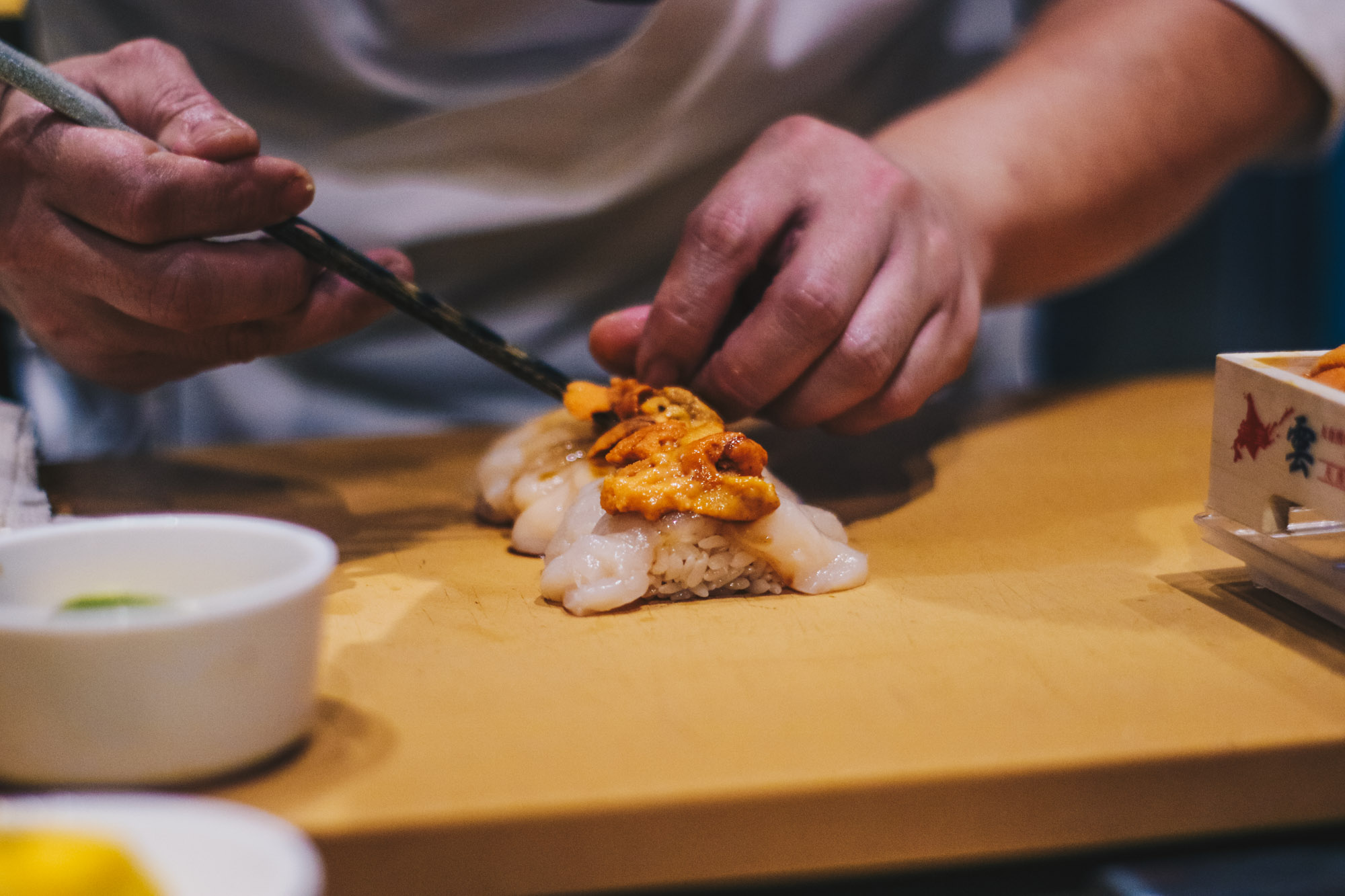 The Unagi Sushi here was on a different level than most places that served Unagi. The Unagi had multiple layers of savory goodness and we encourage you to try it for yourself.

Maki with Cucumber, Japanese Pickles, Chopped Tuna and Aburi Otoro, topped with Ikura (Salmon Roe) and Uni (Sea Urchin)was another example of the generous offering by MAI with the huge portion of Sea urchin. The chopped tuna was fresh and the Aburi Otora brought texture play to the Maki. 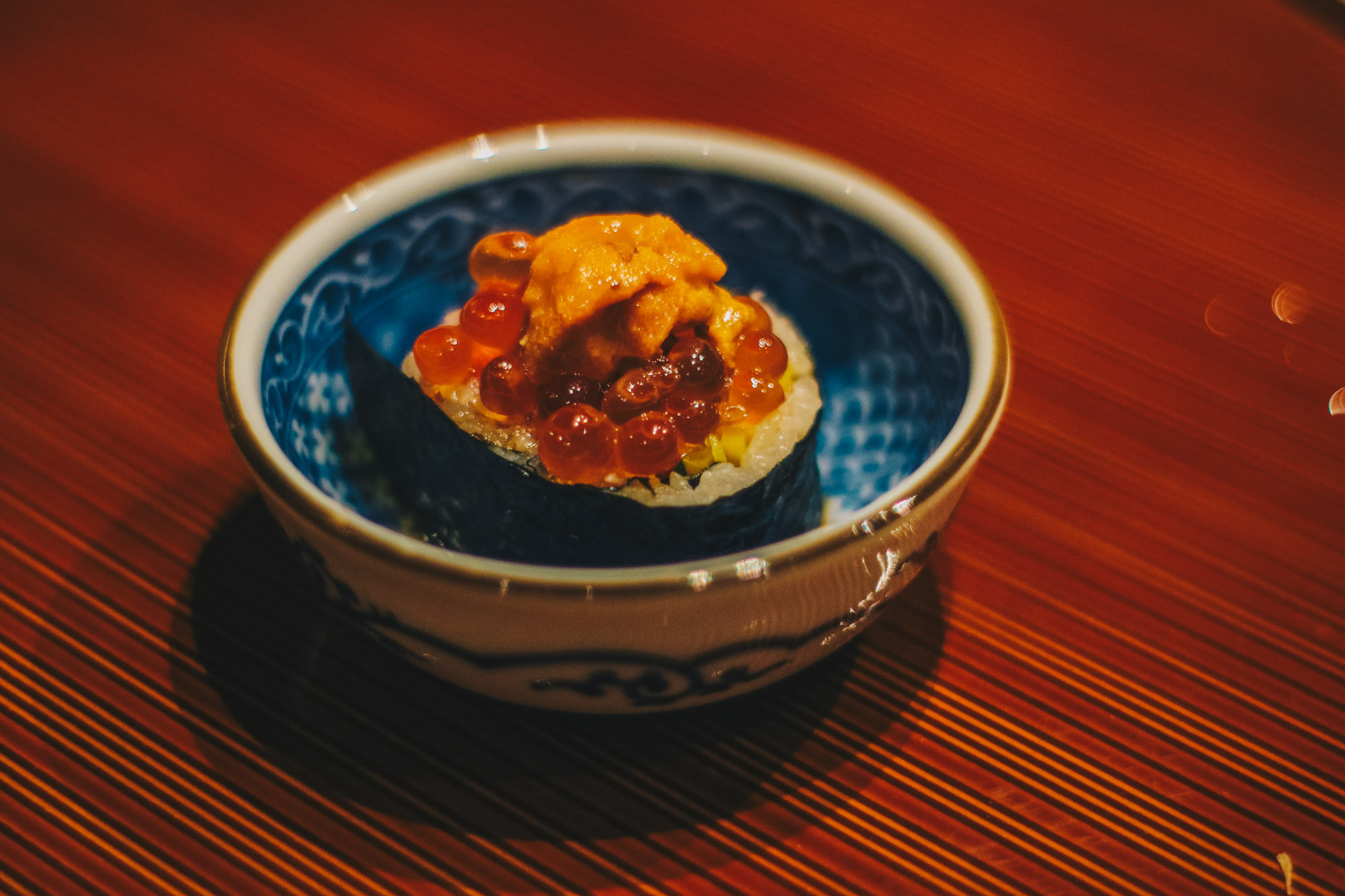 We ended the night with Daifuku Mochi (Mochi stuffed with Strawberry)the soft and chewy Mochi is a lovely pairing with the sweet strawberry. 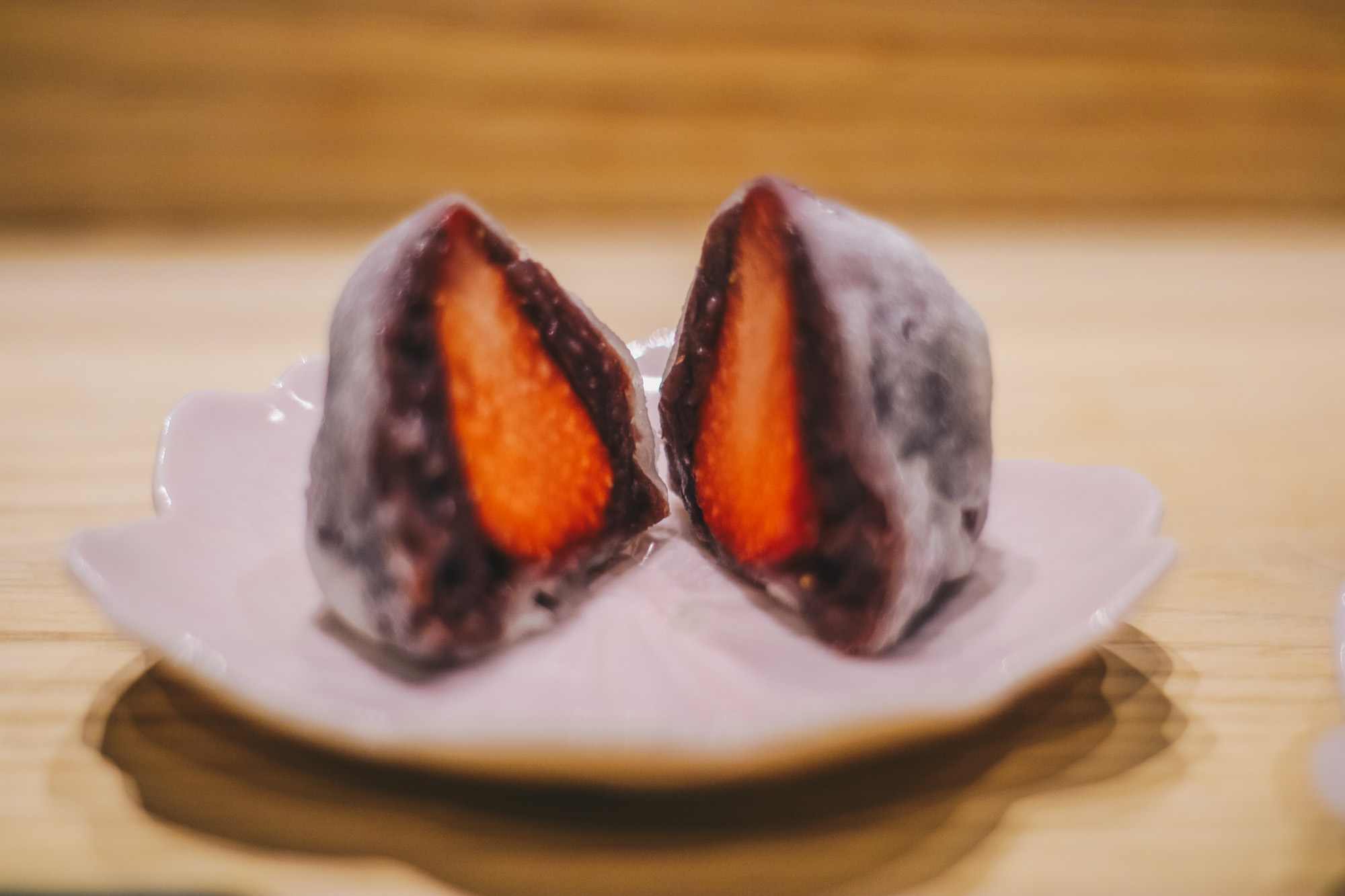 MAI, produces beautifully crafted authentic Japanese dishes that shine. Chef Hiroyuki Ono’s execution of top-quality ingredients is certainly set to impress and is ideal for business lunches and gatherings with friends and loved ones. The Omakase is good value with a generous portion of top-notch ingredients imported from Japan weekly.

This was an invited tasting, though all opinions expressed are our own.