woke up early in the morning, prepared my stuff and off to plaza singapura.. Meeting shihui, sheryl, victor and yiwen there for carls junior breakfast.. but in the end, i didn’t ordered anything as i’m going for lunch buffet in the afternoon for my aunt’s birthday celebration.

After breakfast, we took a bus down to bugis and there was pple queuing up already.. went to look for the securities and organiser.. but they’ve not arrive yet. after awhile, CK came and we held a small briefing on what to do later on. at ard 10.45am i left the briefing and went over suntec to meet my mum and aunties. waited for ard 30mins before they arrived.. haha.. went for the porridge buffet at joaquim.. nice yummy~!only $12.80nett on weekends and public holiday, and $9.80nett for weekday~ cheap right?? alot of varieties of side dishes to choose from..

I left at ard 12.50pm, back to bugis and started work immediately.. was looking after the crowd in front of the stage and thanks to merisa for treating us each a LARGE cup of coke from mac.. haha.. damm cooling drinking it under the hot sun.. but the weather just changed suddenly when the event was about to start… it started raining on and off… and one of the public beside me just fell down straight onto the ground.. was damm shocked when i saw that.. helped her up and she was kinda of giddy and lean againest her boyfriend shoulder when she suddenly slipped and fell again.. wa… second time lor.. me and daisy was shocked again haha.. we opened up the barricade and pull a chair for her to rest and gave her some water as well.. after ard 15mins of resting, we let them into the queue again.. phew… luckily nothing serious happen…

look at the crowd ~ 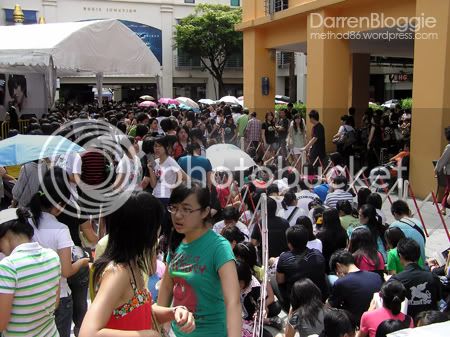 at ard 3.30pm, 刘力杨went on stage to perform her first song, 我就是这样, followed by 眼泪笑了… after that was the duet with yoga, 传说， followed by 神秘嘉宾, 伯乐 and 病态 by yoga.. after the performance, the rain stopped as well and the autograph session begins… 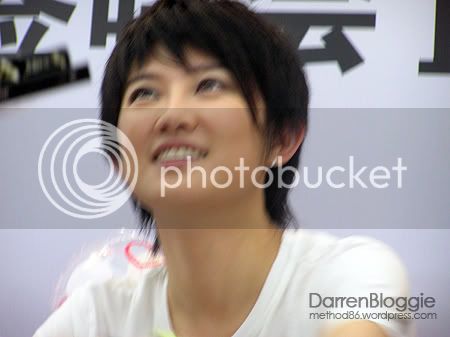 we’re the last to went on stage to get our album signed.. hehe.. after that, we rushed down to the carpark and escort them off.. finally, mission accomplished~! yea~! once again, another successful event !

damm hungry after the event.. so we went for dinner with anna at ajisen.. wooo~

after dinner, went over to rac house and meet the rest.. they play their mahjong while i watched tv over there haha.. at the same time to collect my mum’s perfume.. Thanks guys for bringing something back for me hehe ~